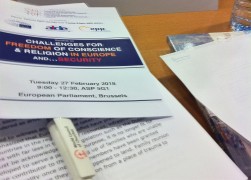 A talk given at a seminar on Challenges for Freedom of conscience & Religion in Europe and… Security at the European Parliament, 27 February 2018

In September 2015 the United Nations Office for the Prevention of Genocide held five regional consultations with people of faith and conviction that they identify indicators of incitement to atrocities, leading to genocide. For the first of these consultations, faith leaders and representatives of faith-based and human rights organisations gathered from across Europe to meet in Treviso, Italy. The two main flashpoints identified were the rise in tensions due to increased migration into Europe by displaced persons, and radicalisation, with concern about young persons, in particular, heading to Syria to join Daesh, and a growth in far right influence.

Much is included under the umbrella of these two issues, and as faith leaders there was concern for a better, more supportive, and humanitarian response to those seeking sanctuary on our shores. It was also considered essential to increase inclusion of women and young people in community and leadership levels, to support their participation in society. Fear over loss of identity, changing demographics, socio-economic strain, and issues around racism and social justice were considered as drivers behind radicalisation.

We have since continued to witness an influx of the displaced into Europe, though it must be emphasised that Europe has not taken in the significant numbers that other countries in the regions of conflict have provided in the way of sanctuary, countries with far less in the way of resources, infrastructure and expertise. While it must be acknowledged that legislation such as the Dublin Regulation were developed to serve a particular purpose, it is no longer fit for purpose, and is a large contributor to the splitting up of families who are unable to re-unite in any single locality once individual members have been granted asylum status in the nations where they have happened to land. Family reunion is one of the crucial elements for healthy transition from a place of trauma to one of settlement, inclusion, and integration.

From the faith community perspective, we have witnessed an outpouring from pockets of the general public, particularly young people, in caring for those whom they see as distressed and in desperate need. And we feel we have not ourselves managed to respond better. But this is countered by an increase in xenophobia and sadly, post-Brexit rise in hate crime and violence as has been demonstrated in the UK. What has not been covered in the media, is that camps of women and young children have developed on the quiet. The women in the camps do not want publicity, do not want their photograph taken, do not want anyone knowing about them. This is predominantly due to security issues surrounding their safety and vulnerability to sexual attack. Women who have already suffered trauma, are fearful of attack and exploitation in the place where they have sought safety.

Despite Home Office research which has indicated that immigration has not had a negative impact on housing, employment, health care or social provision, and in fact has contributed positively in the way of taxes on income, a suspicion of those who have immigrated into the UK continues to grow, particularly fomented by far right groups. And our partners from faith communities in Europe report the same rise in hate crime. This is particularly focused on Muslim women. Following the terror events in London, research showed that over 70% of the victims of hate crime were young women of Muslim appearance, while the same percentage, over 70%, of the perpetrators were white men.

Women have become the scapegoats for societal fear when it comes to xenophobia and male aggression. They have become an outward symbol of fear and extremism – when all they are doing is wearing the clothing they have always worn. Women’s expression of faith and of themselves has become an easy, and rather lazy, means for politicians and legislators to score political points. Little girls wearing a headscarf in school have been equated with extremism, and women at leisure on a beach have had their clothing forcibly ripped from them by police. Whether it is women’s outward expression of their faith in clothing or wearing of symbols, or women wearing short skirts and revealing clothing being blamed when victims of sexual attack, or women losing their jobs because they have refused to wear short skirts and revealing clothing – there seems to be a cultural objectification of women that lays the morals, freedoms and ills of a nation at the feet of women’s choice in clothing. And there seems to be a need to curtail that choice through legislation.

Each and every session at the United Nations World Humanitarian Summit in Istanbul in 2016 emphasised the necessity of inclusion of women and young people at all levels of negotiation and delivery in response to crises and aid. It was emphasised repeatedly that in any crisis or disaster, it is women and the young who are the most vulnerable to exploitation, sexual violence, slave labour, and trafficking. Children are forced to act as soldiers or slave labour, and yet it is the youth who are at the forefront when it comes to humanitarian advocacy and volunteering, providing homeless shelters, foodbanks, aid to refugee camps. Those working in provision of aid programmes contend that it is women who are at the forefront of protecting family and nurturing community, and yet have the least access to life-saving aid.

It is proven time and time again that if women are included at all levels of development and negotiation, the health, financial well-being and education levels of both men and women improve. Don’t include women – it simply doesn’t happen. Include women at all levels in conflict resolution and peace-building, and a longer-lasting, stronger peace is built. This isn’t because women have all the answers, but because women form half of our communities, half the world. There is a Chinese saying that women hold up half the sky – the heavy half.

Women are more than your sisters and mothers, aunts and daughters. They are more than keepers of the home. They are people of faith, and people of conviction, they are artists and skilled workers, doctors and cleaners and lawyers and truck drivers, they are leaders of communities of faith and of nations. But more than this, much more than this, they are human beings with their own identities – identities that are not reliant on who they are in relation to men, or who they are in relation to their job. They are people, with needs and rights and gifts to be shared.

So where do we go from here? There are no easy answers. It’s not about solving a problem and then it is done. It is a journey, it is about consultation, it is about collaboration, it is about having conversations with one another, conversations of respect and reverence for the sanctity of the human being before us, whatever their faith, or their belief, whatever their gender or tradition or culture or language. What we need, all we need – is to make a commitment to a relationship with one another – a commitment to Love.